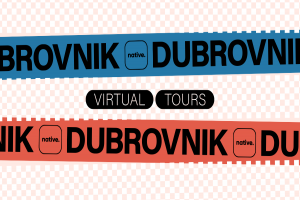 Dubrovnik, also known as ""The Pearl of the Adriatic"", is a perfectly preserved medieval city with huge sturdy stone walls built between the 11th and 17th centuries for protection and that back in those years, it used to rival Venice as a trading port.

On this live virtual tour, you will take a stroll down the quaint narrow streets of Dubrovnik’s picturesque Old Town through its impressive surroundings while hearing its tales and history that only a local professional tour guide can tell.

Onofrio’s Fountain, built as a part of the water supply system in the 15th century that was once a vital water source for the town's people.

The Franciscan church, the third oldest public pharmacy in Europe from the 13th century

St. Blaise’s church, Dubrovnik's saint patron, and hear his story about him and traditional procession held on his feast day

Orlando’s column, a 600-year-old column carved in honour of the legendary knight Orlando, who saved Dubrovnik from a siege by Arab pirates in the 8th century

City Belltower, a beautiful landmark of the Old Town with a bell struck by two bronze men

Revelin fortress, created to give additional security to the Eastern city gate

Book your place via our Native event platform.