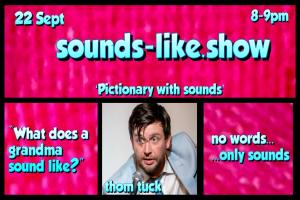 Are you ready to have a giggle? Then this one's for you. From the creators of the award-winning and critically acclaimed show ThisIsYourTrial. Join host Thom Tuck in a head to head game of “skill”. You better get practising your humming because in this game there is only one rule. No words.

The host, Thom Tuck, is a celebrated actor and stand up comedian, former nominee for the prestigious Edinburgh Comedy Award, performer from the Penny Dreadfuls, esteemed sketch group, with countless BBC radio 4 shows, appearances in CBBC Horrible Histories and actor with multiple ensemble pieces in the West End and television.

Participants in the show will be given animals, things, people, songs and emotions, to portray to their teammates, using only the medium of sound, noises from their mouths, so that they can try to guess answers to those challenges.

It’s super silly, furiously funny and can be played at home by all audience members.

Book your place via our Native event platform.