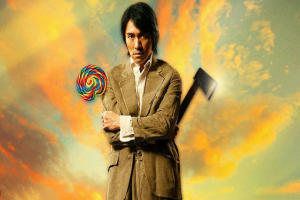 To celebrate Lunar New Year, Union Films are inviting you to this FREE film screening of Kung Fu Hustle in The Cinema, B42!

When the hapless Sing (Stephen Chow) and his dim-witted pal, Bone (Feng Xiaogang), try to scam the residents of Pig Sty Alley into thinking they're members of the dreaded Axe Gang, the real gangsters descend on this Shanghai slum to restore their fearsome reputation.

Union Films is the Student Union's very own cinema. It's completely run by students, from the front of house staff who sell tickets and refreshments to the projectionists who show the films on our projectors. Union Films show a large variety of films including British, European and art house as well as the latest Hollywood blockbusters.

Union Films is your student-run cinema, right at the heart of Highfield Campus. Located in the Union, we're completely run by volunteers; from the from the front of house staff who sell tickets and refreshments, to the projectionists who show the films on our 35mm and digital projectors. You can help out as much or as little as you like, and when you do, you get to see films for free!